Not quite so lost sites around town

Instead of talking, I thought I would show some remnants of some of the things that we as a city have let go; although a couple of places are still around and being used in one way or another.

Dilworth Elementary School located on Euclid Avenue near Latta Park still has part of the original building that was not torn down when the 1960’s portion of the building was added.  The old building is still being used and an addition added in the 2000’s comes complete with a fish pond in the lobby and is attached to the Tom Sykes Recreation Center: 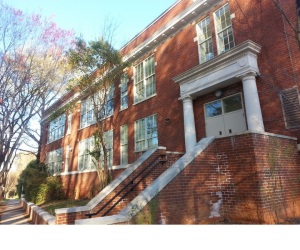 Dilworth Elementary School – part of the original building. Picture taken by the author.

Another building that is still being used is the old McCrorey YMCA at the corner of Caldwell and East 3rd Street.  Currently used by the United Way of Central Carolinas this was in the old neighborhood known as Brooklyn which was destroyed by Urban Renewal in the 1960’s which after 50 years still echoes in the minds and hearts of its former residents.

McCrorey YMCA currently being used by the United Way of Central Carolinas. Photo taken by the author.

Last, but by no means least, is the remnants of the old Piedmont and Northern (P & N) Railroad trestle located on South Graham Street near the Bank of America Stadium.  As the area near the stadium and the BB&T Ballpark was the old rail yard, it was natural that trestles would be built across the gullies and ridges that the city was built on.  If you think about it, if the trestle was still in use, it would be lower than the “Canopener” bridges in Durham and Raleigh (you may have remember me talking about them in a previous entry!)

I will be doing some more looking around for more buildings and old sites that are not quite “lost” but may not be quite all there either.  Enjoy!

Posted by mariaperry1 on May 16, 2015 in Uncategorized