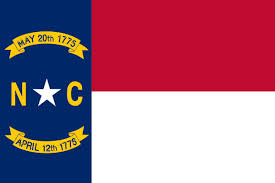 On the North Carolina State flag, there are two dates that most people don’t know why they are on the flag.  One of them is May 20, 1775 and the other one is April 12, 1776.  The first date commemorates the signing of the Mecklenburg Declaration of Independence (some historians call it the “Mecklenburg Resolves, Charlotteans call it “Meck Dec”) which was signed in Charlotte a year before the Declaration of Independence was approved and signed in Philadelphia.  The other date commemorates the Halifax Resolves which also stated that North Carolina would no longer be subjected to the wishes of the British Crown and called for Independence, the first colony to do so again, 2  1/2 months before the Continental Congress would approve the Declaration of Independence.

1. There are too many witnesses to the reading of the “Meck Dec” on the steps of the County Courthouse by Thomas Polk who was an relative of President James K. Polk including those who signed the document including Hezekiah Alexander.

2. According to witnesses in Salem (now known as Winston Salem) they saw Captain Jack riding through their town on the way back from Philadelphia with the document in his hand.

In years past, there used to be a big celebration of Meck Dec day.  I found this on the cmstory.org site: 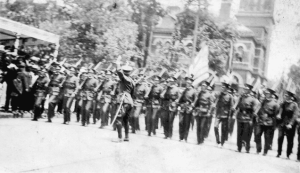 Military Unit participating in the 1914 Parade. Image courtesy of the Robinson-Spangler Carolina Room of the Charlotte Mecklenburg Library.

And that was not enough, we have this plaque not only commemorating Meck Dec, but the Battle of Charlotte in the middle of the Square at Trade and Tryon Streets, I don’t think we would have done it if it did not exist:

Plaque located on the Square commemorating Meck Dec and the Battle of Charlotte. Image courtesy of the Robinson-Spangler Carolina Room of the Charlotte Mecklenburg Library via Google Images.

I hope to meet Attorney Syfert and thank him for writing about a subject that I will admit is controversial because no copies can be found right now.  If you want to learn more please check out:

NCPedia; this is where I got my information on the Halifax Resolves as well as  the Meck Dec (they call it the Mecklenburg Resolves).

If you want to see an interview of Attorney Syfert by D. G. Martin on North Carolina Bookwatch, please turn to UNC TV (if you live in North Carolina or get it on your cable system) Sundays at 12:00 PM with a repeat on Thursday at 5:00  PM. If you cannot get UNC TV, please go to http://www.unctv.org/content/ncbookwatch to see full episodes.  I will be DVR’ing this as I will be on the way home from work.

Posted by mariaperry1 on May 20, 2015 in Uncategorized