I was looking for another business that I saw on a post on Facebook when I came across this ad in the 1953 Hills Charlotte City Directory for the Westside Ice and Fuel Company.  When I looked up the former address it was located where Johnson C. Smith University has built student housing with ground level retail.

I am not sure when this company went out of business, but when I arrived in Charlotte in 1982, the site was known as Carostate Ice and the parking lot facing Duckworth Avenue held ice machines that the company owned that was either broken or awaiting transportation to area stores to hold bags of ice for sale.

Charlotte before 1960 had several dealers for block ice (this was in the days of iceboxes, which required blocks of ice to help keep foods cold or frozen in the days before substantial freezers on refrigerators)  and coal, which was used to heat homes and sometime business buildings (including schools) in the winter.

I will be exploring these type of businesses in future writings.

I found this ad in the 1953 Hills Charlotte City Directory, courtesy of digitalnc.org

Posted by mariaperry1 on January 18, 2015 in Business, History, Places

Ceasar R. Blake, Jr. (1886-1931) is one of those people that outside of the Prince Hall Masonic family here in Charlotte that no one knows anything about. Serving as the Imperial Potentate for the Ancient Egyptian Arabic Order of the Nobles of the Mystic Shrine, Prince Hall Affiliated (A.E.A.O.N.M.S.) or better known as the Shriners, he also served as the presiding officer of Paul Drayton Lodge # 7, later serving the Prince Hall Grand Lodge as the Grand Senior Warden. 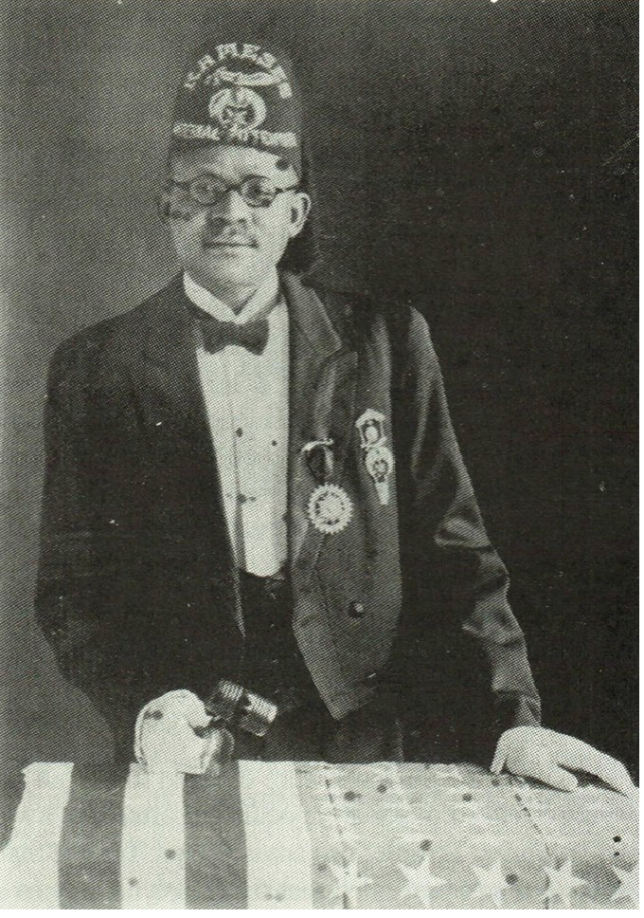 In his private life, according to the 1912 Hills Charlotte City Directory (page 131), he was a clerk with Norfolk and Southern Railway (page 331) and lived at 411 East 1st Street which was between Brevard and Caldwell Streets in the old Brooklyn neighborhood.  When he passed away in 1931, he was buried at Pinewood Cemetery, which was set aside for blacks as it was custom and and law during this period.

I encourage you to read more about him or the period in which he lived.

I got my information from:

Update (01/11/15):  Thanks to my husband who reminded me that First Street did not cross Sugar Creek back in those days,  I went back to verify my information and to find the right place via the 1911 Sanford Fire Insurance Map located at:

Posted by mariaperry1 on January 10, 2015 in History, People, Streets

While we take it for granted in 2015 that we can find a hotel that fits our budget and stay anywhere we want to regardless of race and that we can find our favorite hotel chain in any town.  But it wasn’t that way in 1950; due to the Jim Crow laws on the books travelers were restricted to hotels that catered to their race and most of the hotel chains such as Marriott, Holiday Inn and Hilton were not available here in town. But, the hotel that you stayed at also depended on how much money you were willing to spend for a good night’s sleep.

Charlotte had its upscale hotels such as the Hotel Charlotte on West Trade Street which was imploded in the mid-1980’s and the Hotel William Barringer on North Tryon Street which is currently being redeveloped after being used for years as a senior citizen’s resident facility.  For African-American travelers, they were directed via the “Negro Travelers Green Book” to the Hotel Alexander was touted in the City Directory as “The South’s Finest Negro Hotel” in First Ward or the Ebony Guest House located at 214 South Myers Street in the Brooklyn neighborhood. 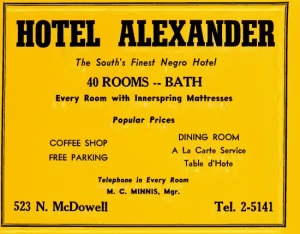 Ad for the Hotel Alexander in the 1950 Hill’s Charlotte City Directory (image obtained via digitalnc.org)

If you didn’t have the means to stay at the Hotel Charlotte, or you were traveling by car with your family, you have a choice between the Stonewall Hotel on West Trade Street near the Southern Railroad Train Station or the T & J Hotel Courts located on Wilkinson Boulevard.

The Alexander, Stonewall, T & J or Ebony Guest House no longer exist.  The Alexander closed in the 1960’s after the Civil Rights Act desegregated hotel accommodations and was burned down by the Charlotte Fire Department in a controlled burn in 1973.  The Stonewall Hotel, which was later renamed the Travelers Hotel became a transient hotel which was later closed and torn down in the mid 1990’s.  T & J Hotel Courts became a Choice Hotel, but was condemned by the City in 2011 after years of calls to police for various things such as drug dealing, prostitution and other problems, it had also become a “rental by the week” hotel that catered to those who could not afford housing in an increasing expensive housing market.  There are no records as to when the Ebony Guest House closed and torn down, I hope one of my readers can help me out with that question.

Doing my research for this entry, I found the following web sites to be very helpful:

I got my ads from the Hill’s 1950 Charlotte City Directory (via digitalnc.org)

Posted by mariaperry1 on January 4, 2015 in Buildings, History, Places