Today’s Throwback Thursday article talks about a school that left us before its 100th Birthday.

Starting out as the North Carolina Military Institute by D. H. Hill and modeled on West Point, it was built in 1859 at what was that time just outside the city limits to the south on what would become Morehead Street at the corner of South Boulevard.  When the Civil War started in 1861, its facility and students took up arms and fought for the Confederacy.  During the war the building was used as  a hospital, prison and medical laboratory.  After the war, it served as the Mecklenburg Female College (1867-1869) and from 1873 to 1883 it served as the Charlotte Military Institute, a private school for boys.

In 1883 it was turned into an elementary school, known as South Graded School serving grades 1-10 (11th and 12th grades were added later) and served the growing southern suburbs of Dilworth and Wilmore . 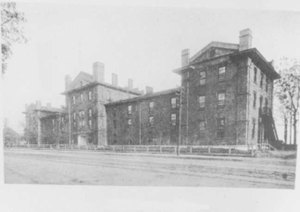 But changing times, shifting population and the opening of schools in nearby neighborhoods including Dilworth, Wilmore and Eastover and the conversion of the building from a school to a maintenance supply warehouse spelled its doom as the building was torn down in 1954.  Now the Dowd YMCA sits on the site of the old school:

If you have a chance to go to the Carolina Room in the main branch of the Charlotte Mecklenburg Library located on North Tryon Street at Sixth Street, please do as you will find a wealth of information including the story of the Charlotte Mecklenburg School System by former superintendent Harry P. Harding (Harding University High School in West Charlotte is named for him) as well as other sources for this article.  I also consulted the J. Murray Adkins Library at the University of North Carolina at Charlotte (GO NINERS!) for some of my information. :

Information about the South Graded School: From the Mary Boyer Collection of the J. Murray Adkins Library of the University of North Carolina at Charlotte. (http://digitalcollections.uncc.edu/cdm/ref/collection/p15483coll1/id/912)

The 1920’s Image of the school: Robinson-Spangler Room of the Charlotte Mecklenburg Library (cmstory.org)

Posted by mariaperry1 on March 6, 2015 in Buildings, History